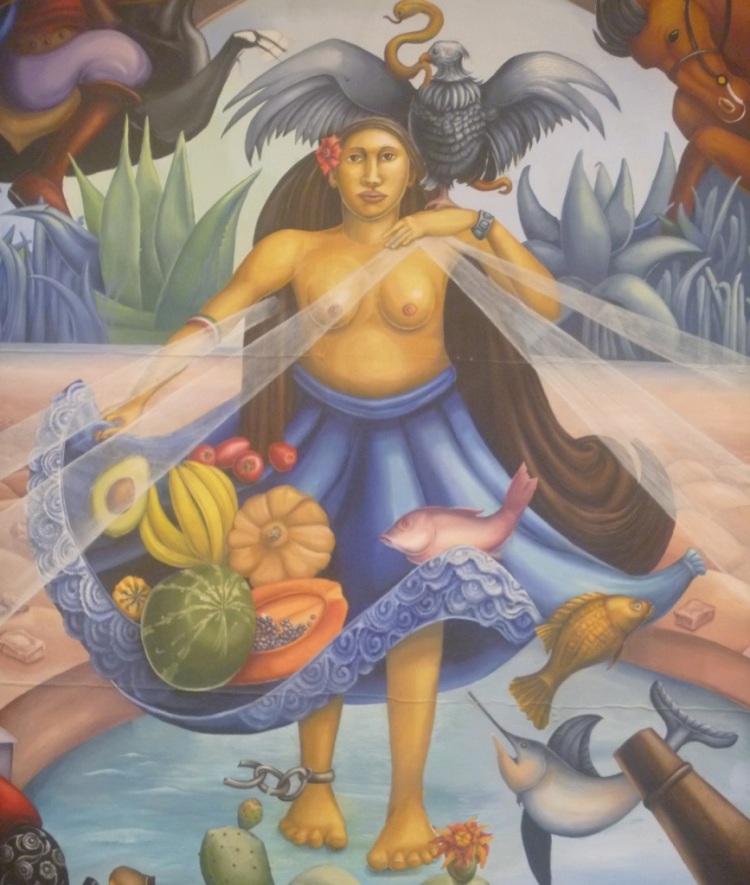 Carmen Cereceda carefully climbed up the metal scaffold in the lobby of a Mexico City office building. From a brown bottle she poured the solvent liquin on her palette of oil paints from the day before. She mixed a middle sepia tone and with long brushes began to paint the face of the sun. She is working on the third and final panel of her massive mural in the SAGARPA building. SAGARPA is Mexico’s Department of Agriculture.

By chance, I have a friend named Diego Dobler who works for this office. He arranged permission for me to see Maestra Cerrada’s work-in-progress. Cerrada worked as an assistant to Diego Rivera in the 1950’s. She has since painted murals in Canada, Chile, Cuba and Mexico. She is a lively little woman with a clear voice and bright eyes. I noticed she was wearing green eye shadow to match her sweater. I told her I found it amazing that she worked with Diego Rivera. “Amazing? Why?” she laughed. “He was quite the man. I worked in his studio for four or five months. Not on an actual mural; he was doing research and working on preliminary drawings. There were five of us. Two young men, three young ladies. He treated us like princesses; the boys- he would yell at them, ‘Flojo!’ You know what that means?- ‘Lazy.”

When I spoke of my love of Mexican art, she reminded me, “I am not from Mexico. I was born in Chile. Chile may be far in geography, but it is very close in culture to Mexico.” She told me after Mexico’s War of Reform, President Benito Juarez was running the country from a carriage; the capitol moving from place to place. Some people in a small Chilean fishing village said that’s not right and began collecting money. The idea spread to Santiago, and these Chileans raised a good deal of money and personally came to present it to Juarez.

“Then when we had that terrible dicatator, Pinochet, in Chile. Educated people found him unbearable and they fled in exile. Many came to Mexico. The highly educated were given positions here, at UNAM, the university. So Mexico and Chile are close.”

The Three Energies is the title of the section she is working on. She pointed out the symbols for wind, solar, and water power. She noted that many murals glorify petroleum, but she wants no part of that. She celebrates only the renewable and clean. The final section will show what she calls the primary energy: young people, educating themselves in revolutionary ways to tranform man, consciousness and society.

My photos don’t do justice to her mastery of the mural form. To see more visit Carmen Cereceda Bianchi on her Facebook page. While you are there, you might ‘like’ her and her work. I do.