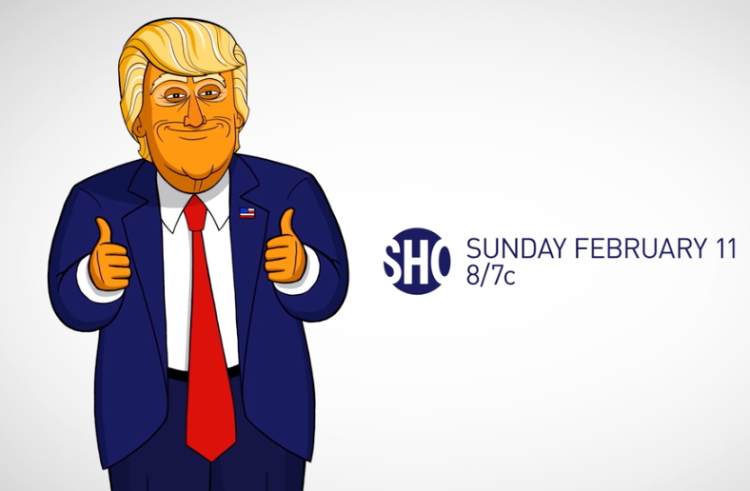 Last year Brian Martin got an amazing job, but had to keep it secret from even his close friends. Animation projects are kept hush-hush so other studios don’t get wind of a great idea. Now he can share that he’s been working on Steven Colbert’s Our Cartoon President. The half-hour cartoon show premieres Feb. 11 on Showtime. Brian graduated in 2015 from Kutztown University majoring in Communication Design with Ad and Illustration concentrations.

Brian signed an NDA, or Non-Disclosure Agreement, so he can’t share photos from inside the studio or images he has drawn for the show. I’ve grabbed art from the official Our Cartoon President trailer, which can be seen at Showtime.

Last year, Brian was a designer for a pharmaceutical e-learning company. It wasn’t his dream job. He promised himself he’d land his first animation gig before he had to renew his apartment lease. He just made it with one month left on the lease.

Q: How did you land the job with Our Cartoon President?

Brian:  “With animation, past experience isn’t that crucial. It’s your reel that counts, and it always comes down to how well you do on your animation test, where they’ll ask you to animate a scene from the show. I finished the test in one all-nighter, and they emailed me the following week offering me a three-week position that could lead to long term if my work was good. It was Friday, and they wanted me to start Monday, so I packed up my desk immediately, and never went back. It was a giant risk, but every bone in my body told me to do it. Best decision I ever made!”

See the demo reel that got Brian’s foot in the door here.

Brian: “The first four weeks, I commuted from north Philly to NYC every day. It was a 5 to 7 hour round trip, – pretty brutal, but I think my commitment to the cause was appreciated! After the first five weeks, we went on a month-long hiatus, so I had plenty of time to prepare for the move. The first season is in production till sometime in March, so I’m staying in an Airbnb in East Harlem. “
Q: Like you, Floyd Bishop and Tom Warburton graduated from KU and had success in animation. Where did most animators you work with study?
Brian: SVA is the one I hear brought up most often.
Q: What is a typical day like? Do you work on one particular character or facet of the cartoon? Do you use specialized software?
“I’m not sure how much of our workflow I’m allowed to talk about, but I can say I work entirely in the realm of hand-drawn character animation. I don’t do any of the puppeting or rigging. We’re animating in Adobe Photoshop so our files can be imported into Adobe Character Animator, a brand new software.”
Q: Can you share some of your sketches?
Brian: Sure! Work stuff is a bit too top-secret, but here’s some recent sketchpad doodles!
Q: What is Steven Colbert like?
Brian: “I’ve only met him a couple times.  First time, I was walking from the bathroom back to my desk. I was alone in the hallway and heard a voice behind me shout, “Hi there!”  I turned around, and he was sticking his head out the elevator door with a big grin on his face, clearly with the intention to startle the hell out of me and leave me star struck. “
“The second time was at the Late Show holiday party.  A coworker and I drunkenly thanked him for our awesome job. He was super cool about it and talked to us for a minute and took selfies with us and a few dozen other people. He just seems like a super nice dude and an average Joe in the best possible way. It’s one of those things that never quite feels real, so it’s hard to truly appreciate.”

Brian can’t talk plot, but Showtime reveals a bit about the show’s first episode: “The President tries to revive his low approval ratings by delivering the greatest State of the Union speech in history and to strengthen his relationship with First Lady Melania by naming her the national bird.”

Brian can’t tell us much more about his work. However, Our Cartoon President‘s lead animator Tim Luecke shares much about process in this cool Adobe video.

Our Cartoon President,  Feb.11 on SHO, or on demand beginning Jan. 28. Could it be funnier than a White House Press conference? Let’s see! New subscribers can get a free 7-day trial of the Showtime app. Tell ’em Brian Martin sent you.

P.S. I contacted Floyd Bishop, now an artist at Microsoft, who taught Brian animation at Kutztown. Floyd says, “Brian pushed himself to tackle tough challenges, and grew his skills faster than anyone I’ve ever seen. Whatever he gets involved with is going to be great!”