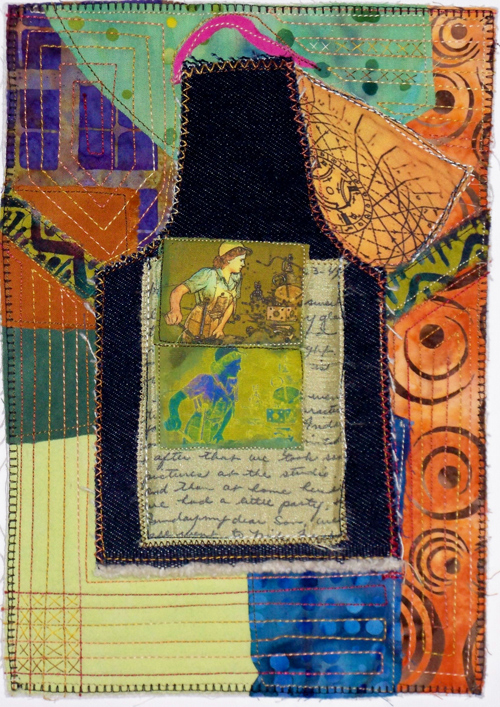 During World War II, many U.S. women changed out of their gingham kitchen aprons and donned heavy protective factory aprons to support the war effort. This took place all across the country. In the 1940’s Penn State’s Allentown Extension campus offered courses in drafting, chemistry, management, and civil defense. Women enrolled in extension courses and became gainfully employed by local industry. To celebrate this part of its 100-year history Penn State Lehigh Valley is mounting a commemorative exhibition. Ten woman artists honor the “Homefront Heroes: Women of WW II,” from Feb. 27-April 28, 2012, at the Gallery of Penn State Lehigh Valley Campus.

Camille Eaton Romig contributed nine quilted rectangles illustrating this metaphor of changing aprons. She calls the series For the Duration. The panel below includes the 1941 headline: “WAR! Oahu bombed by Japanese Planes.” Camille’s father was stationed at Hickam Field, Pearl Harbor’s ground zero, on that date that will live in infamy. I asked Camille about how she created this project and about her parents.

“My dad was 19 and in the Army Air Forces, 72nd Bombardment Squadron, at Hickam. He was a buck sergeant. Later, he met my mother in Kansas in 1944. She was a WAC. I included the front page with the Pearl Harbor attack headline to honor him as well as to define the beginning of the duration.”

“I bought fabric prepared for ink jet printers–silk, cotton and organza. I found images on the internet (open source) and I manipulated them in a limited way with software that I had available–some day I’ll get PhotoShop.”

“Some of the images I incorporated include ration cards, a draftsman’s drawing of a U.S. Army airplane, letters, slide rules, compasses and the central lathe operator.”

Camille shared this background info about one historic photo she used: “The photograph of a metal lathe operator radiates strength, energy and beauty and presented an acceptable new image of women. Credited to Howard R. Hollem of the Office of War Information, it was probably used to motivate women to serve in the huge war machine that was required to win. Their humble services in industry, agriculture, education, volunteer organizations and the military were in addition to the many domestic challenges of the era. They did all jobs, whether traditionally understood to be masculine or feminine. They wore all the aprons.” 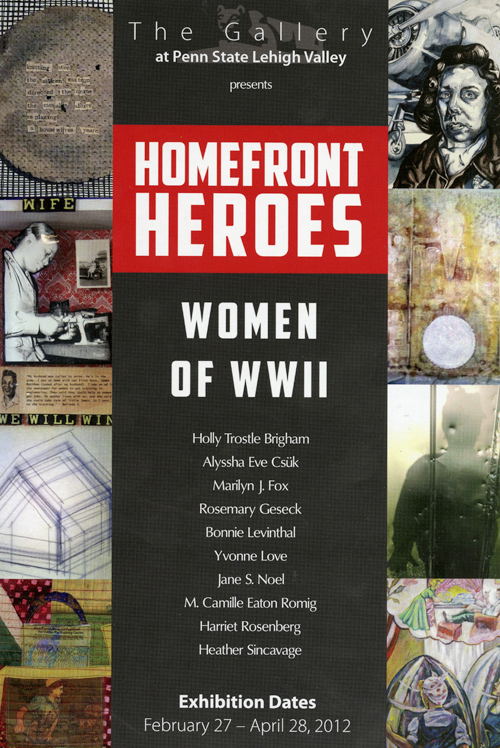 The postcard above lists the other artist participants. More info on the PSLV Gallery, including location and hours, can be found here.