I picked up a sad old book for 50¢ at the Kutztown Library sale. The cover reminded me of Jean Charlot’s art. The pages were yellowed, torn in places, many illustrations were defaced with crude blue pencil marks. Even in this sorry state I found the book quite moving. Citizen 13660 is a graphic documentary by an American woman put in a concentration camp near San Francisco. Citizen 13660 was first published in 1946, before the terms graphic novel or graphic memoir existed. 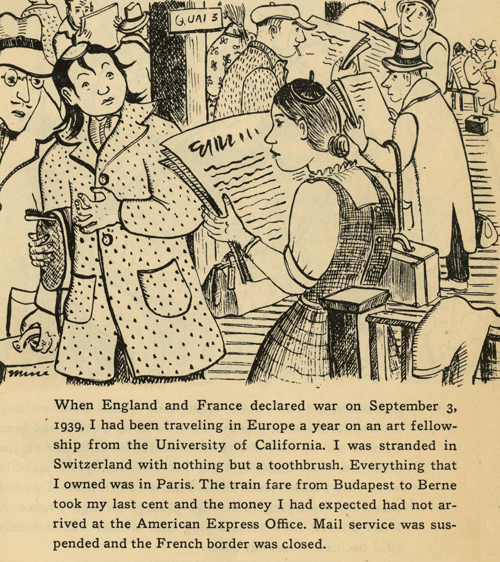 Miné Okubo was born in Riverside, CA to Japanese parents. A top art student at U.C. Berkeley, she won a prestigious fellowship to study in Europe.  She studied with Leger in Paris, but 1939 was not a good time to live in Europe. When the Nazis took Paris she managed to get home to Berkeley, California with only the clothes on her back.

Okubo got some interesting art jobs for the Roosevelt’s WPA.  She worked with Diego Rivera for a time when he was doing his San Francisco murals. She got her own commission create a mural for a Soldier and Sailor’s Hall in Oakland. Then the Japanese bombed Pearl Harbor. She had to carry special authorization papers to allow her to travel more than 5 miles from her home in Berkeley to Oakland.

Things quickly got worse for the Japanese-Americans. They were rounded up and put in internment camps. Miné and her family and 8,000 others were taken to Tanforan, a camp made from a run-down horse track in San Bruno, just south of San Francisco.

Her text is remarkable for its simplicity. She notes gambling was forbidden, yet they were living in stalls at a race track. She avoids pointing out the irony, letting the reader connect the dots.

The “Japanese American Segregation Centers” were the result of racism. Over 100,000 Japanese-Americans were imprisoned, the majority were U.S citizens. The U.S. was waging war with Germany and Italy, too. German-Americans and Italian-Americans may have suffered wartime discrimination, but they were white Europeans, and so never herded into interment camps like the Japanese.

Her sketches document the daily indignities of six months at Tanforan. Then she and her brother were relocated inland to Topaz, a Japanese Relocation Center in Utah. Topaz was even less pleasant than Tanforan. After two years of confinement she was eventually released. She remained an artist until her death in 2001 in Greenwich Village, NYC.

Miné Okubo wrote  “I am often asked, why am I not bitter and could this happen again? I am a realist with a creative mind, interested in people, so my thoughts are constructive. I am not bitter. I hope that things can be learned from this tragic episode, for I believe it could happen again.‎”

The pages of my first edition of Citizen 13660, (Columbia University Press, 1946) are falling apart as I turn them. I may be the last person to read this particular volume. Fortunately, the book has been reissued in paperback by the University of Washington Press. And nearly 200 of Okubo’s internment camp sketches can be found here on the web site of the Japanese American National Museum. Miné Okubo illustrated a life worth remembering.