Loni Sue Johnson is an an illustrator who has had enormous success. Her whimsical watercolor illustrations graced the pages of the NY Times and six memorable New Yorker covers. Then one day in 2007 she fell ill with viral encephalitis, a rare condition, sometimes carried by mosquitos and ticks. She survived the virus, but large portions of both sides of her brain suffered devastating neurological damage. 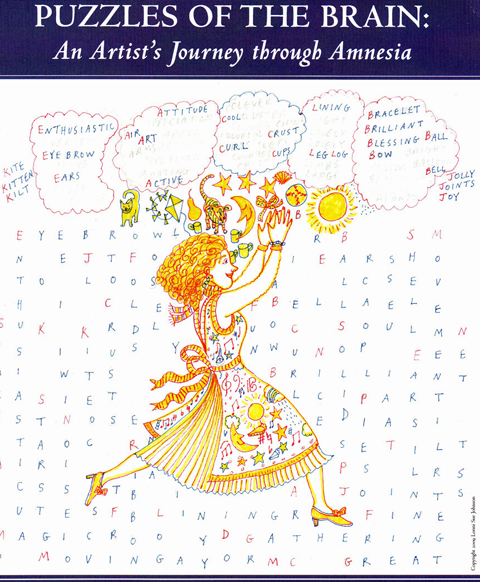 Drawing from the Right and Left Side of the Brain:

Her mother, Margaret, invented drawing games to rehabilitate Loni Sue. She would draw a partial drawing then ask Loni Sue to complete it. Very gradually Loni Sue began to draw again. Shown artwork by famous artists she had studied in school, like Vincent Van Gogh, Loni Sue failed to identify the artist. But shown her own artwork, pre- or post illness, she recognized it immediately as her own creation. This suggests how very deeply one’s drawing style becomes ingrained in one’s self-identity.

An exhibition originally organized by Baltimore’s Walters Art Museum can be seen at Morven Museum and Gardens, Pricenton, NJ, through June 3, 2012. It is a wonderful show. Two Johns Hopkins University scientists, Dr. Barbara Landau, an old friend of Loni Sue, and Dr. Micheal McCloskey have been studying her art.

Most illustrators are familiar with Betty Edward’s Drawing on the Right Side of the Brain.  Dr. McCloskey describes Loni Sue’s recovery portfolio as a sort of scientific detective story. The left brain/right brain divide may be more porous than we thought. There is a remarkable short video at the exhibition, in which Dr. McCloskey states, “I think if we were to make a map of the brain which showed which parts of the brain were important for art it would be pretty much the whole brain.”

Loni Sue on NPR: Radio seems a nutty way to consider illustration, but Guy Raz’s poignant interview with Loni Sue and her sister Aline is well worth a listen.

See more of Loni Sue Johnson’s art via the links on her blog.

2 thoughts on “An Illustrator’s Mind Explored”